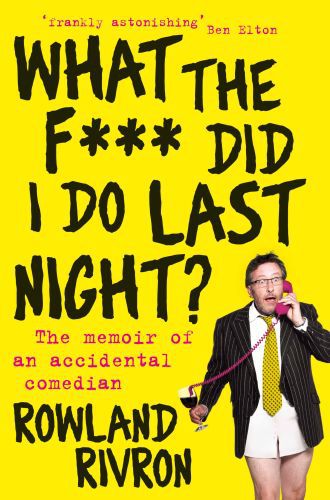 What the F Did I Do Last Night

Rowland Rivron was a stalwart of the 1980s Alternative Comedy movement - part of a band of comedians who tore up the scene with a new, anarchic, unapologetically irreverent comedy we now take for granted. He toured with The Young Ones and The Comic Strip, was a regular on The Tube, played Dr Scrote on Jonathan Ross's The Last Resort, and, of course, created the shambolic Dwayne, one half of inimitable pop duo Raw Sex on French & Saunders. He would be the first to admit that alcohol has played a large part in his story, and he has spent a fair proportion of the time out to lunch, in both senses. Then theres the occasional nudity and a dislike of self-important celebrities which landed him in trouble with his bosses as often as it won him fans in the public. The result is a series of hilarious and occasionally death-defying escapades that hark back to a time when PR didn't get in the way of a good night out and, as with punk and music, comedy was the medium whereby anyone who dared to get up on stage could find themselves famous.