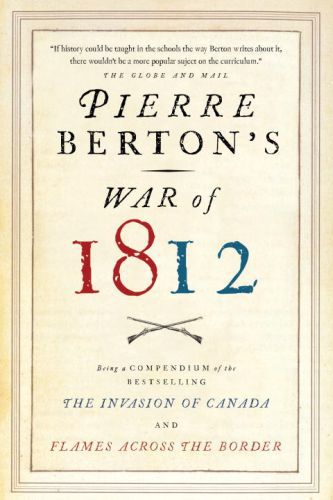 To commemorate the bi-centenary of the War of 1812, Anchor Canada brings together Pierre Berton's two groundbreaking books on the subject. The Invasion of Canada is a remarkable account of the war's first year and the events that led up to it; Pierre Berton transforms history into an engrossing narrative that reads like a fast-paced novel. Drawing on personal memoirs and diaries as well as official dispatches, the author has been able to get inside the characters of the men who fought the war - the common soldiers as well as the generals, the bureaucrats and the profiteers, the traitors and the loyalists.
The Canada-U.S. border was in flames as the War of 1812 continued. York's parliament buildings were on fire, Niagara-on-the-Lake burned to the ground and Buffalo lay in ashes. Even the American capital of Washington, far to the south, was put to the torch. The War of 1812 had become one of the nineteenth century's bloodiest struggles.
Flames Across the Border is a compelling evocation of war at its most primeval - the muddy fields, the frozen forests and the ominous waters where men fought and died. Pierre Berton skilfully captures the courage, determination and terror of the universal soldier, giving new dimension and fresh perspective to this early conflict between the two emerging nations of North America.
From the Trade Paperback edition.