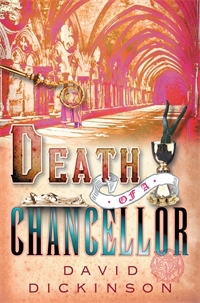 Death of a Chancellor

A case of murder in the cathedral!
Compton Minster is preparing to celebrate a very special anniversary in the year 1901 a thousand years of Christian worship. But a few weeks before the main ceremonies, a high official of the cathedral, the chancellor, dies in mysterious circumstances, and no one except the doctor and the undertaker is allowed to view the corpse. It then transpires that the chancellor was one of England s richest men. When his sister suspects foul play, Lord Francis Powerscourt is asked to investigate. As Powerscourt paces the ancient cloisters and listens to evensong from the choir stalls, he begins to suspect that a terrible secret lies hidden in the cathedral, one that may have something to do with the anniversary. Then a chorister is strangles, his body found turning on the great spit in the Vicars Hall kitchen. Powerscourt himself escapes death by a whisker, as does his wife, Lady Lucy, before he uncovers the astonishing secret of Compton Minster and unmasks a murderer.